Please Note: F. 2 Division’s responsibilies included financial and establishment issues in the War Office (see War Office List 1920, pp. 185-186). F. 5 Division was responsible for the financial vote (budget) for the actual physical cost of the medals issued by the War Office, ‘Medals (Vote 11E) (see Ibid, p. 189)’. C. 4 Division’s responsibilities included work connected with the ‘…the appointment, transfer, promotion, leave, and discipline of members of civil establishments, and of retired officers, ex-soldiers and temporary employees at the War Office, ex-soldiers and temporary employees at the War Office, and correspondence with the Civil Service Commission and the Treasury connected therewith… (see Ibid, p. 89)’. Sir B.B, Cubitt and J.A. Corcoran were Assistant Secretaries working for Sir Herbert Creedy (Secretary of the War Office), who held overall responsibility for the areas covered by the C Divisions.

Analysis (followed by the sources)

The dominant issue running through this correspondence between the Treasury and the War Office is that of the upgrading of the Deputy Assistant Adjutant General, head of the Medals Branch (A.G. 10) Lieutenant Colonel Frith to an Assistant Adjutant General (A.A.G.). This was requested because of the responsibilities which came with his position, said to have the possibility if executed badly to embarrass the Secretary of War and lead to questions being asked in the House of Commons. It was also held by the War Office that he required promotion as heads of branch who dealt with the Adjutant General or other senior figures were normally A.A.Gs. rather than D.A.A.Gs.  Frith’s workload was said to be so heavy that he had only had three weeks leave in three/four years. The Treasury eventually agreed to his promotion in 1920. Their opposition to agreeing to Frith’s promotion was partly based on a perception that military officers need not be in charge of complex War Office administrative tasks, with the example of C2 Casualties (responsible for dealing with Casualty Lists in the War Office) and its 2,000 staff run by a cheaper civilian Civil Service grade held to prove their point.

However the main importance of this correspondence is in revealing new previously hidden detail about the organisation of the sections of Medal Branch, with the Division split in 1919 into five sections, dealing with:

(i) Medals other than those for the present war

(iv) The British War Medal, and

The sections, with each section in 1919 under one of five Staff Captains working direct to Lieutenant Colonel Frith, can be compared to the breakdown of staff given in reports produced by the Medals Branch in 1919. These reports include costings covering staff, time and money needed to support the medal issue programme either then in progress or anticipated (for these reports and correspondence please click here). A comparison between the reports and the correspondence included here reveals that the organisation of staff below Staff Captain and section level was more combined than suggested by the list of sections given above. With most medal work for Great War related medal issues (other than Gallantry and honour related work) dealt with by a combined administrative staff. There is also no mention here or in the 1919 costing reports of the Territorial War Medal, which was not confirmed until A.O. 143/1920 of 26 April 1920. Battle Clasps for the British War Medal and a Home Service medal were also still expected to be part of the programme after 1919.

Aside from wanting to upgrade the D.A.A.G. to a A.A.G. post to head A.G. 10, the War Office until January 1920 wanted two D.A.A.Gs. under the A.A.G. The first heading up sections ii to v (grouped together as sub-sections as part of an overarching section called ‘Section 1’ in the relevant letter dated 25 July 1919) and the other heading up (i) above, under an overarching section called ‘Section 2’ . ‘Section 2’ would deal with the campaign medals for past wars, gallantry medals, efficiency medals and some non-military awards such as the Albert and Board of Trade medals. A comparison with the 1919 Medals Branch costing shows how small this area of work had become by 1919 in terms of staff allocated (for the costing click here).

Ominously for A.G. 10 the Treasury only reluctantly sanctioned the compromise staff changes suggested by the War Office. A short Treasury inspection of the Branch took place at the end of 1919. The inspection focused on A.G. 10’s staffing and processes. It identified what one of the inspecting Treasury team (an ex-War Office official, Mr Biggs) saw as inefficiency in A.G. 10’s record keeping and medal issue processes (for more on his report and the correspondence which followed,  which is of great importance in understanding Medals Branch and its processes at this time, please click here).

In the last pieces of correspondence included here the Treasury identified the Great War related Campaign Medal programme as too expensive, not properly sanctioned by the Treasury and ripe for reduction or simplification, with staff costs a small target compared to the capital costs of the programme. Items such as the proposed Battle Clasps programme were also clearly in the Treasury’s sights. 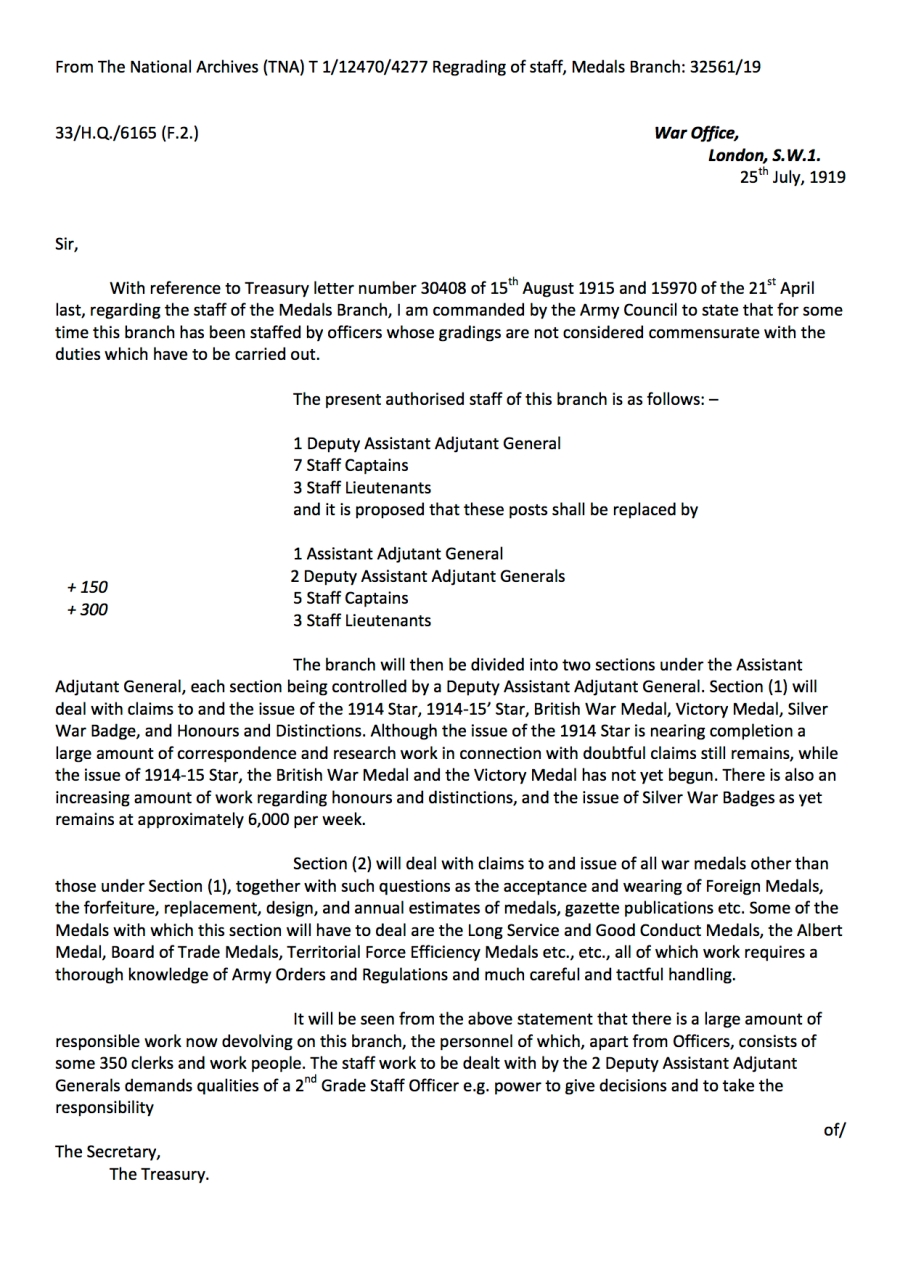 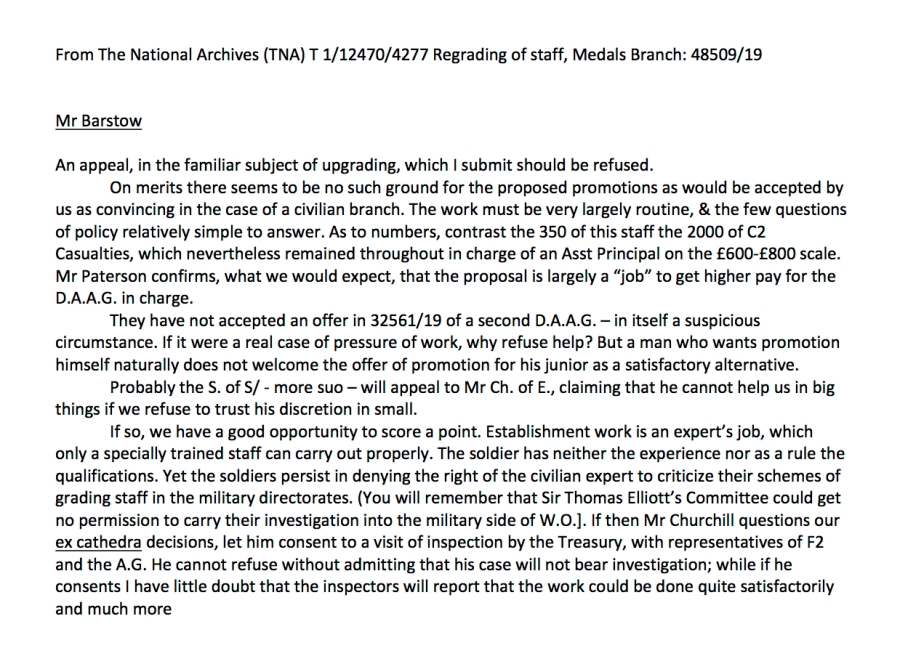 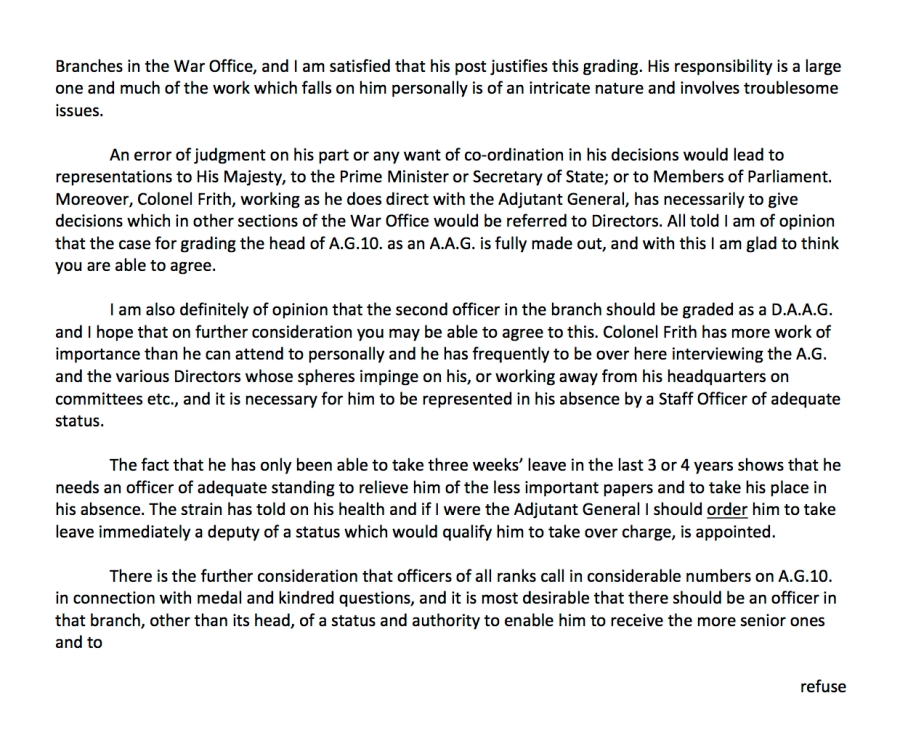 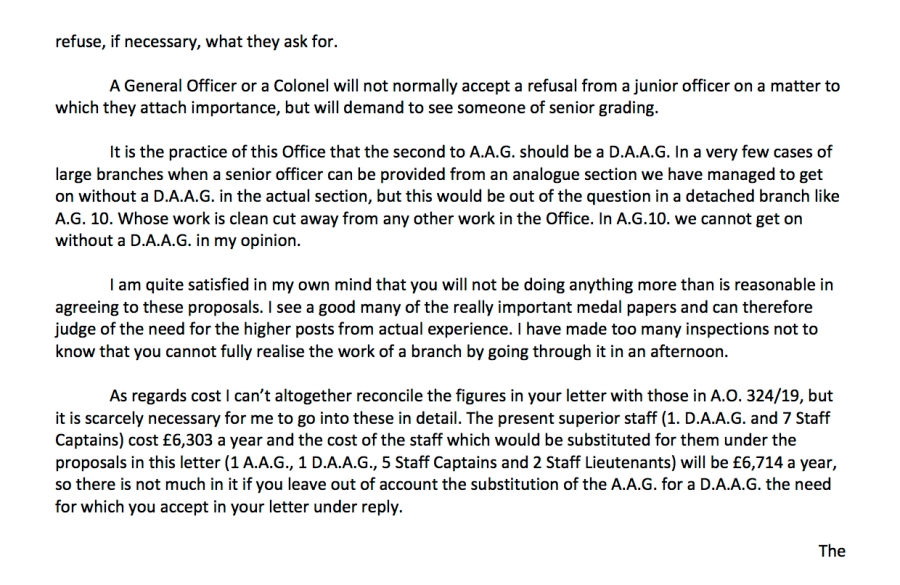 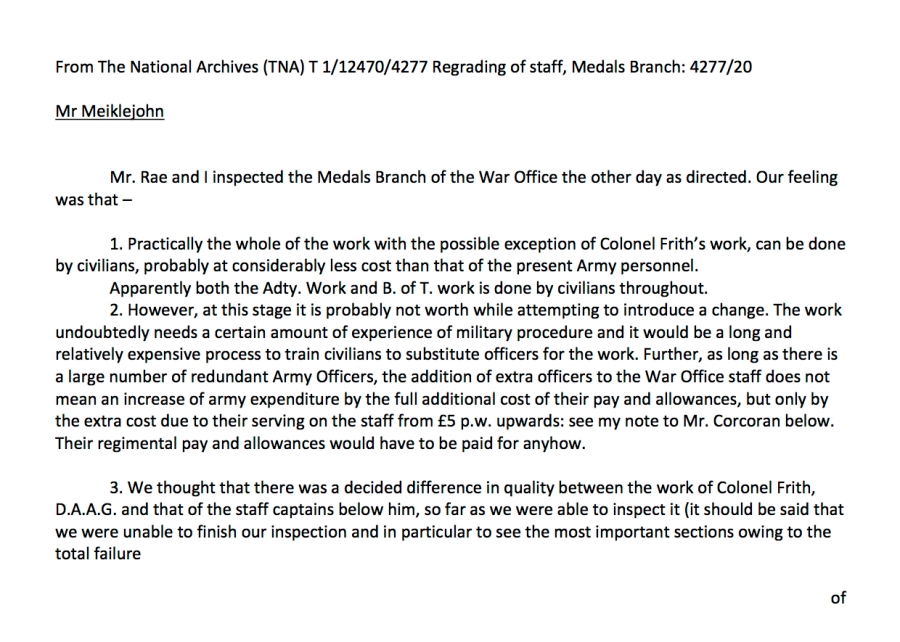 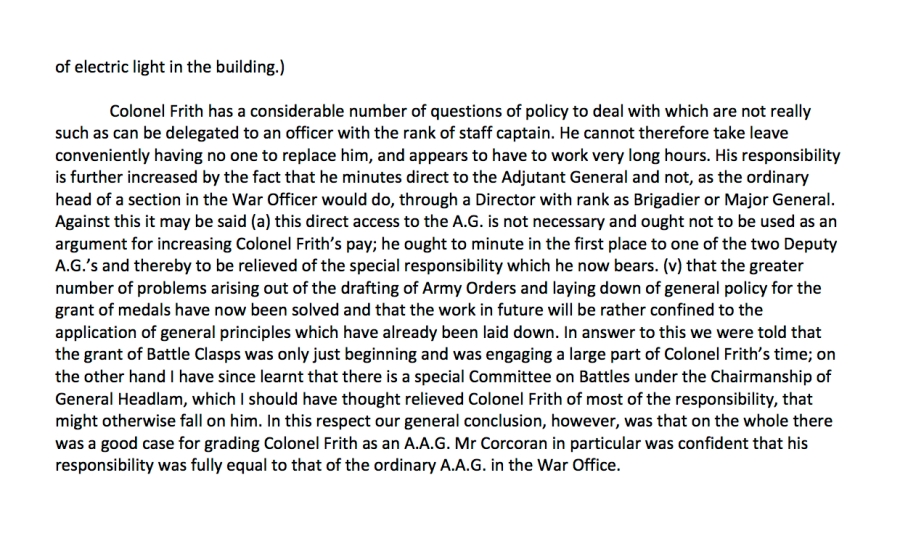