Introduction/Analysis (followed by the Report)

The 1921 Interim Report Of The Committee on Record Offices was in fact the final report of this committee. The Committee had its origins in Treasury disquiet over the work involved in A.G. 10. Medal Branch making a very large Card Index for the WW1 related medals for which it had responsibility (for the correspondence between the Treasury and War Office which led to this committee please click here). The Card Index was made in part as a response to errors in the Medal Rolls submitted by the Army Record Offices.

One of the members of the Committee was Lieutenant Colonel Cornish Bowden from A.G. 1 (R). A.G. 1 (R) played a role both in the compilation of Soldiers Died in the Great War (S.D.G.W.) (click here to find out more) and in the publication’s adoption by the Imperial War Graves Commission as the basis for its lists for the memorials to the missing (click here for more information).

After setting out the different types of Record Office in the Army in 1921, the report states that due to pressure of work in the Record Offices caused by the short lived Miners’ strike of 1921 (which led to the calling up of the Reserves and the Defence Force, for an excellent short article on this see Chris Baker’s article from the Long, Long Trail), the interim report was focused on information obtained from four Infantry Record Offices visited by the Committee.

Discussion of the general filing systems used in Record Offices was focused on the abandonment during the War of a War Office based thematic filing system in favour of the Regimental System used before the establishment of the Record Offices in 1905. The A.B. (Army Book) 193 mentioned in the report was according to King’s Regulations 1912, Amended 1914, a register of ‘Letters Received (see The King’s Regulation And Orders for the Army 1912, Re-printed with Amendments published in Army Orders up to 1st August 1914. H.M.S.O.: London. Para 1880: table).

The need for as many instructions circulated from the War Office to the Record Offices to be in the form of numbered Army Council Instructions (first instituted in 1916, with back copies known as War Office Instructions compiled from War Office Circular Letters going back to 1914, see here), rather than as individual War Office circulars, is made clear. The aim being to save work in Record Offices as A.C.Is. were indexed and easily referenced. Mention is also made of the bulletin sent out by A.G. 1 (R) of relevant instructions/information to Record Offices (for example we see here an instruction about the compilation of Soldiers Died In The Great War).

A comment that Officers in the Record Offices are to stop signing and stamping the back of King’s Certificates comes before extensive comment on a related area of work commemorating individuals war service, that is the Medals work undertaken by the Record Offices.

Medal Work (part of the so-called ‘Aftermath’) work is clearly identified in the section dealing with Medals as being the biggest area of Aftermath work affecting Record Offices. The need for simplification and streamlining of this process as an immediate measure is mentioned, with negotiations with A.G. 10 Medal Branch by members of the Committee a part of the Interim Report. The improvements made from the end of April 1921 were focused on new arrangements to pack British War and Victory Medals together into one box ready to be sent out to each recipient. The contents of each box were from now on to stamped on the lid of each box. It was also agreed that Record Offices would no longer open boxes to check the contents. Incorrect medals would be returned directly to A.G. 10 by the recipient.

The Medals section also includes a mention of a pressing topic at this time, the need to maintain large staffs in the Record Offices for years to come if Battle Clasps were to be issued. The eventual abandonment of this scheme and the completion of much of the ‘Aftermath’ work by the mid 1920s allowed the move of the pre-August 1920 Service Records from the Army Record Offices to the Isleworth Schools in 1926.

Another concern raised is over the inefficiencies caused by Army Record Offices and Pay Offices not always being located next to one another. The Committee felt that due to the inter-relationship between their work and records the two types of office should always be in close proximity to one another. This concern together with the continuing reduction in Army funding would lead to the merger of many Pay and Record Offices in the 1920s.

Cost control, an overwhelming need in an Army faced by a steadily declining budget is again paramount in discussion of the number of clerks needed in Army Record Offices. In Appendix C the astonishing figure of 4,300 clerks being needed at the beginning of the 1921 financial year (April 1921) to deal with the records of ‘Non-Effectives’ is mentioned. The ‘Non-Effectives’ were at this point primarily the war service only soldiers. They had been discharged from all reserve obligations with the end of the Z Class Reserve on 31 March 1920 and the suspension of the Military Service Acts. Up until the end of the Z Class Reserve these Reservists only ongoing obligation (apart from in the event of the Z Class Reserve being mobilised) was to notify the Record Offices if they changed address (see Memorandum Of The Secretary Of State For War Relating To The Army Estimates For 1920-21 (Cmd. 565, 1920). HMSO: London. p 8). Much of the work with the ‘Non-Effectives’ records was related to War Pensions, replacing discharge/conduct papers and Medal work, but even by March 1923 the work dealing with these records in Record Offices still required 1,508 clerks.

It is astonishing that in 1927 R.Records at Isleworth, who had taken over custody/responsibility for the service records of soldiers discharged from the Army before the change to Army numbers in August 1920 (including pre-Great War service records), was dealing with the records of ‘Non-Effectives’ with just 63 staff (see War Office List entry, pp. 112-113). This compares to a ratio of 1 clerk to 2,000 records in April 1921 and 1 clerk to 2,600 records in March 1923. Even with the end of most Aftermath work by 1926 the move of the records to R.Record’s custody represents a huge cost saving over keeping the records in the Army Record Offices. With 66 staff by 1928 (an extra 41 staff since 1926) R.Records was looking after a vast number of papers (plus other papers connected with the Great War and pre-Great War Army) with relatively few staff, compared to the 1,058 Clerks of March 1923 (for the 1926 War Office List entry see p. 67 and for 1928 Ibid see pp. 64-65).

The total of 3,921,000 service records for non-effective soldiers in 1921 compares with 6½ million documents (service records, including the Machine Gun Corps up to 1922, see The National Archives (TNA) WO 32/21769 Records Destroyed at Arnside Street: Records Destroyed At Arnside Street (list). p.6) held by R.Records at the time of the Arnside Fire on the 7/8th September 1940. If we do not count the Assistant Principal who by 1939 held responsibility for R.Records along with being Private Secretary to the Under Secretary of State, there were only 38 staff in R.Records by the time of the 1939 War Office List (accurate to Feb 15th 1939)  pp. 78-79). Although the workload was considerably less than in 1923, the staff of R.Records had according to Gordon Hampden  in 1934/5 answered approximately 1,500 enquiries per week based on the Great War service records alone, with another 400 enquiries per week based on enquiries using the other records held (The figures come from Hampden Gordon (1935) The War Office. Putnam: London. pp. 273-274). The War Office had succeeded via R. Records after 1926 in dramatically reducing the costs of maintaining and using the Great War Service records through having far fewer clerks to answer queries than had been the case in the Record Offices. The small number of staff at Isleworth and then Arnside were of course helped by diminishing use of the records, but as the figures for enquiries given by Hampden Gordon show, R.Records was a very efficient operation when the number of staff (not all the staff were clerks) is compared to the sheer number of records held.

Discussion of the need for Officers in the Army Record Offices to sign off/decide the rating of a soldier’s character for a replacement Conduct Certificates can be compared against the heirarchial approach followed at R.Records, with essentially higher civil servants/senior clerks taking the role of the Officer in deciding/signing Character Certificates (for examples from R. Records see here).

Expediency during the War and low pay/uncertain prospects following the Armistice are said to have diluted/reduced the number of experienced and knowledgeable clerks employed in the Record Offices. As would be expected, the ideal Record Office clerk would be ex-Army and have worked in an Orderly Room. In the staffing problems faced by the Record Offices, along with a huge increase in work occasioned by the War and its Aftermath we have the major source of inaccuracies in records derived from Great War service records.  We can see this in the concerns of A.G. 10 Medals Branch at the War Office over the accuracy of the Medal Rolls submitted by Record Offices and the problems experienced by the Imperial War Graves Commission in seeking Record Office help in the verification process. A lack of experienced clerks, combined with a heavy workload for the Offices led to mistakes being made. Inaccuracies in the information compiled for S.D.G.W. (Soldiers Died In The Great War) can be added to this list.

The report also reveals that before the War the ratio of clerks to papers was fixed at one clerk to 1,000 service records. During the War the need to keep this ratio (with new clerks not being sanctioned until each extra 1,000 service records had been added to the Office) led to serious inefficiency and delay as Record Offices could not start training clerks in anticipation of increased demand. In a report dominated by recommendations on how to achieve efficiencies and cut costs, the recommendation that at the beginning of a time of War Officers i/c Records should be able to immediately double their staff without specific approval (along with proposals for the future management and motivation for Record Office staff), stands out from the rest of the Report.

In addition to the Interim Report there is also included at the end of the page a transcribed letter from the 1920 Army review into efficiencies in the Guards’ Regiments, part of the evidence for a proposal (which was rejected) to establish one Record Office for the Guards. The item included shows that in the Scots Guards in 1920 one clerk was employed in Medals work, one in issuing Memorial Plaques and another in Parliamentary Registration (for the National Archives (TNA) file reference please see the transcription). 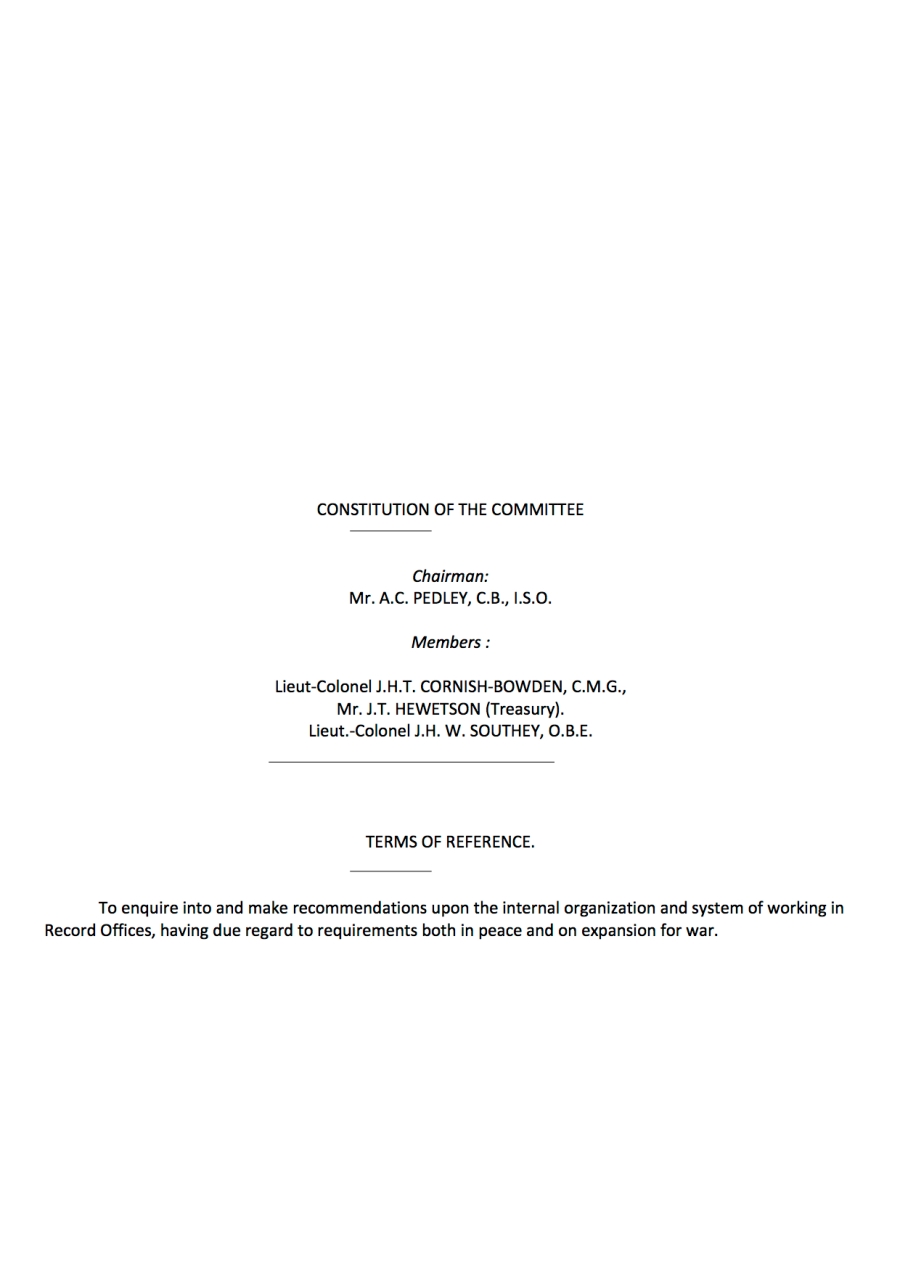 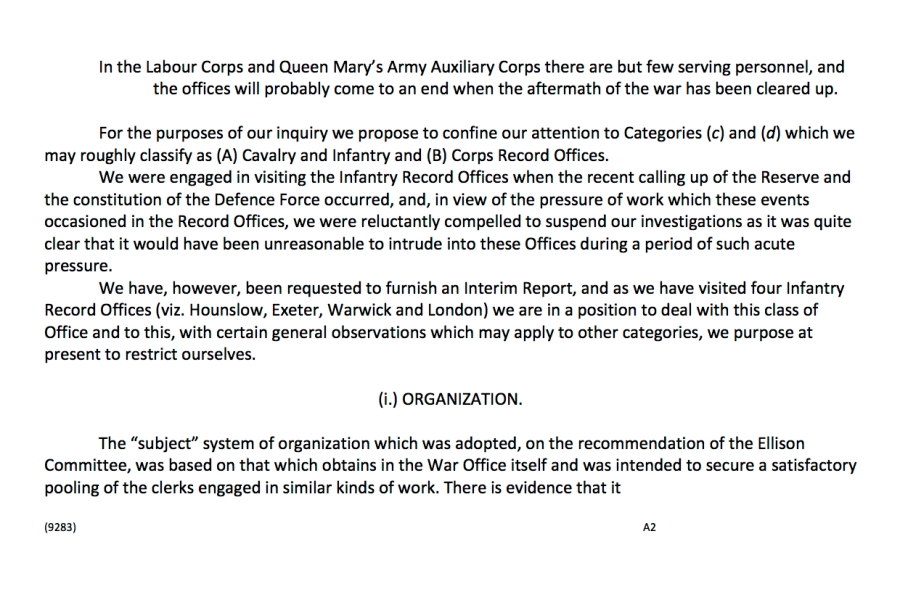 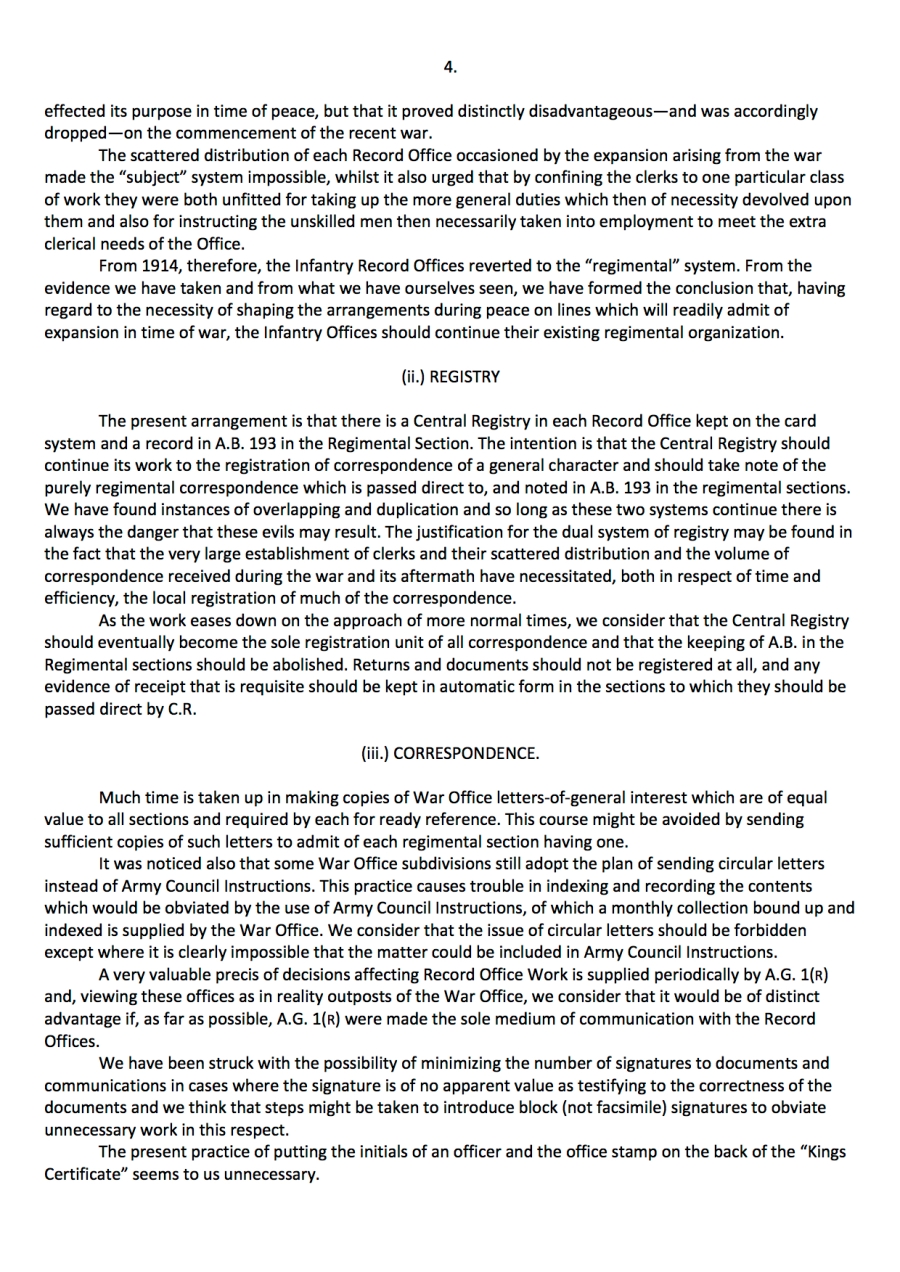 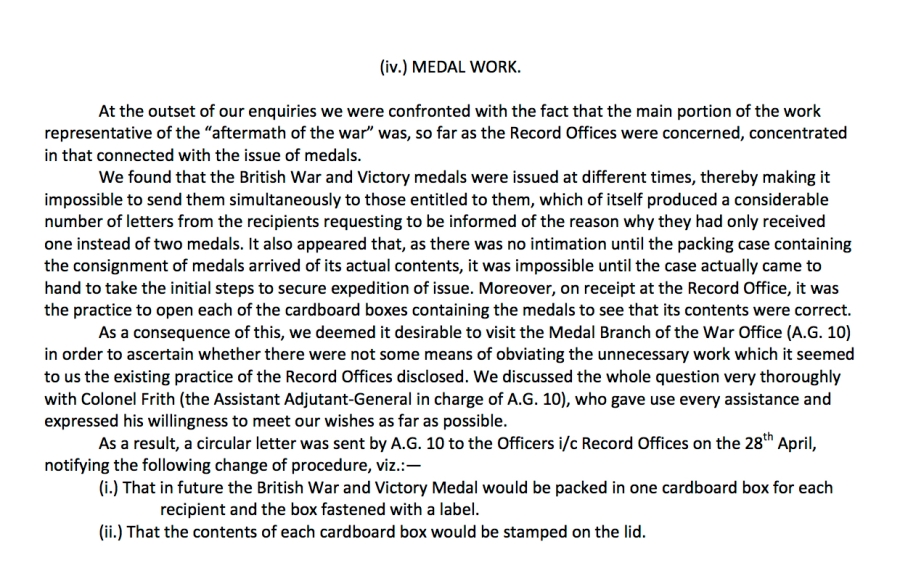 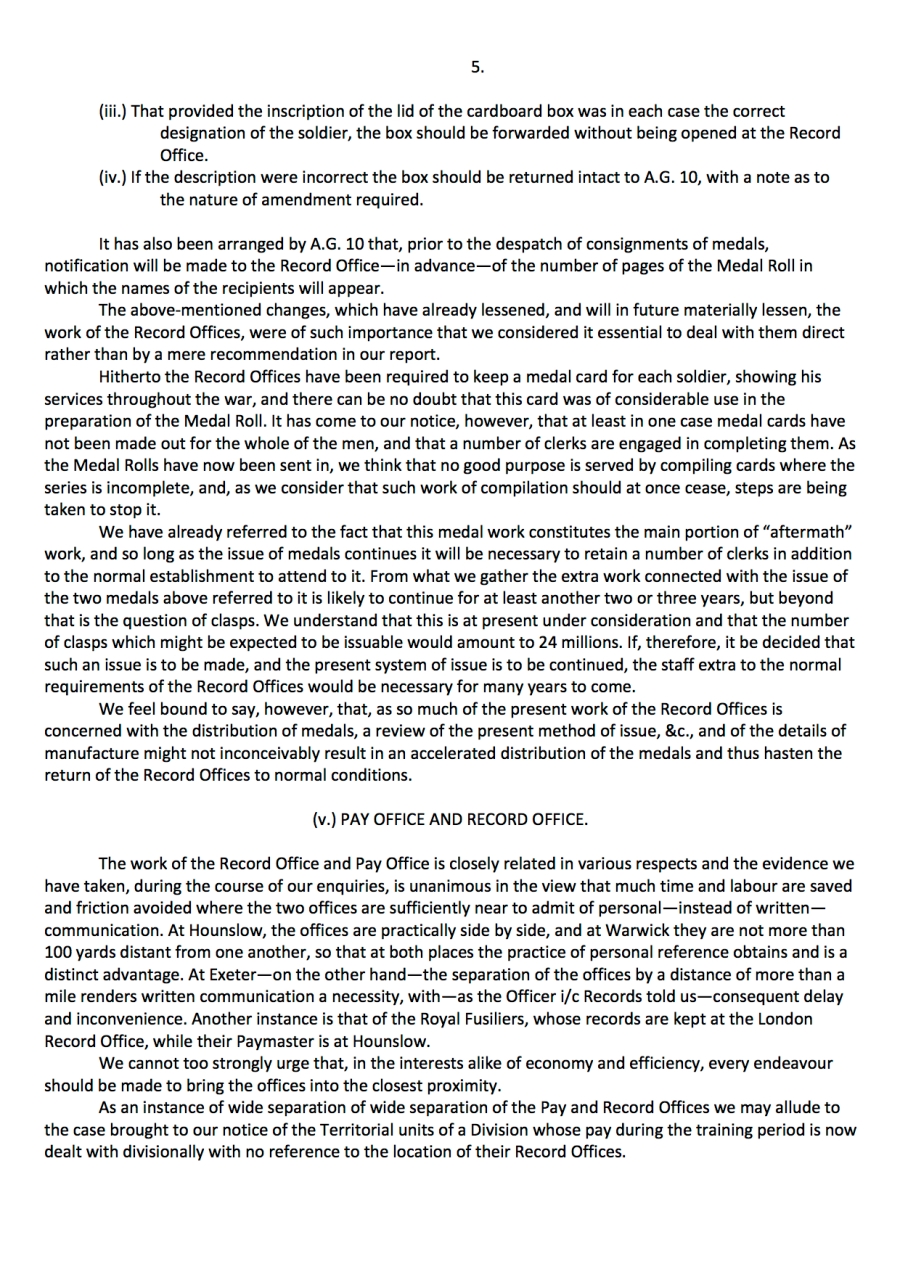 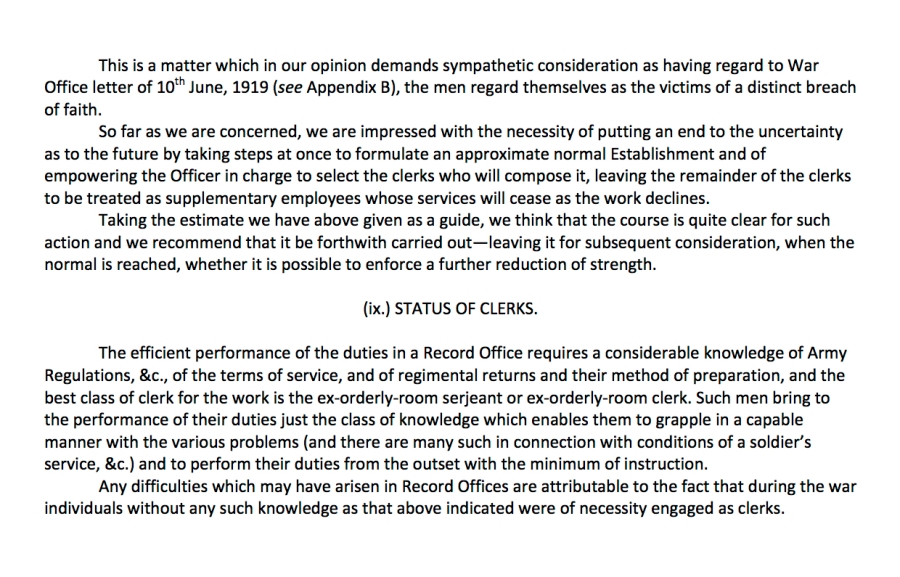 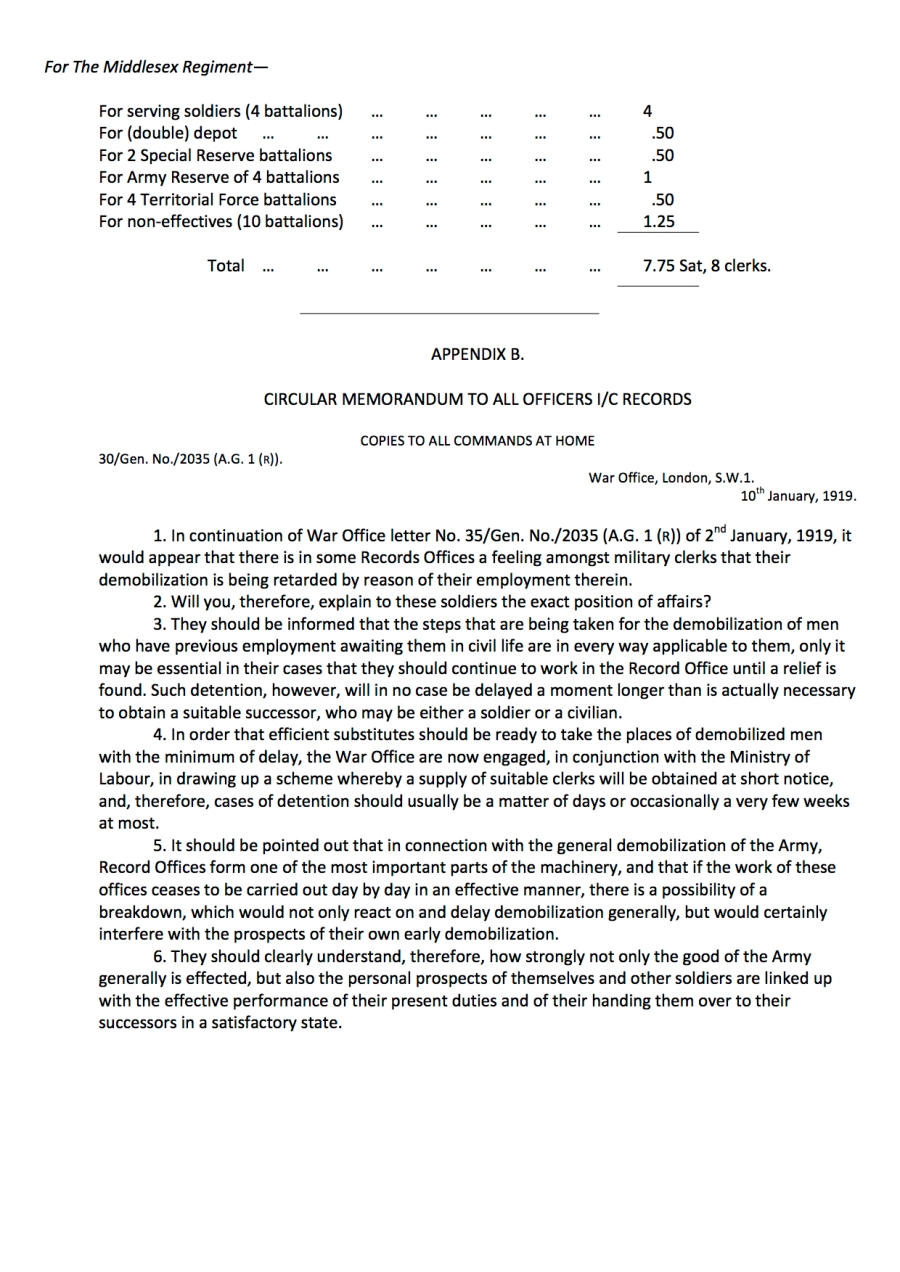 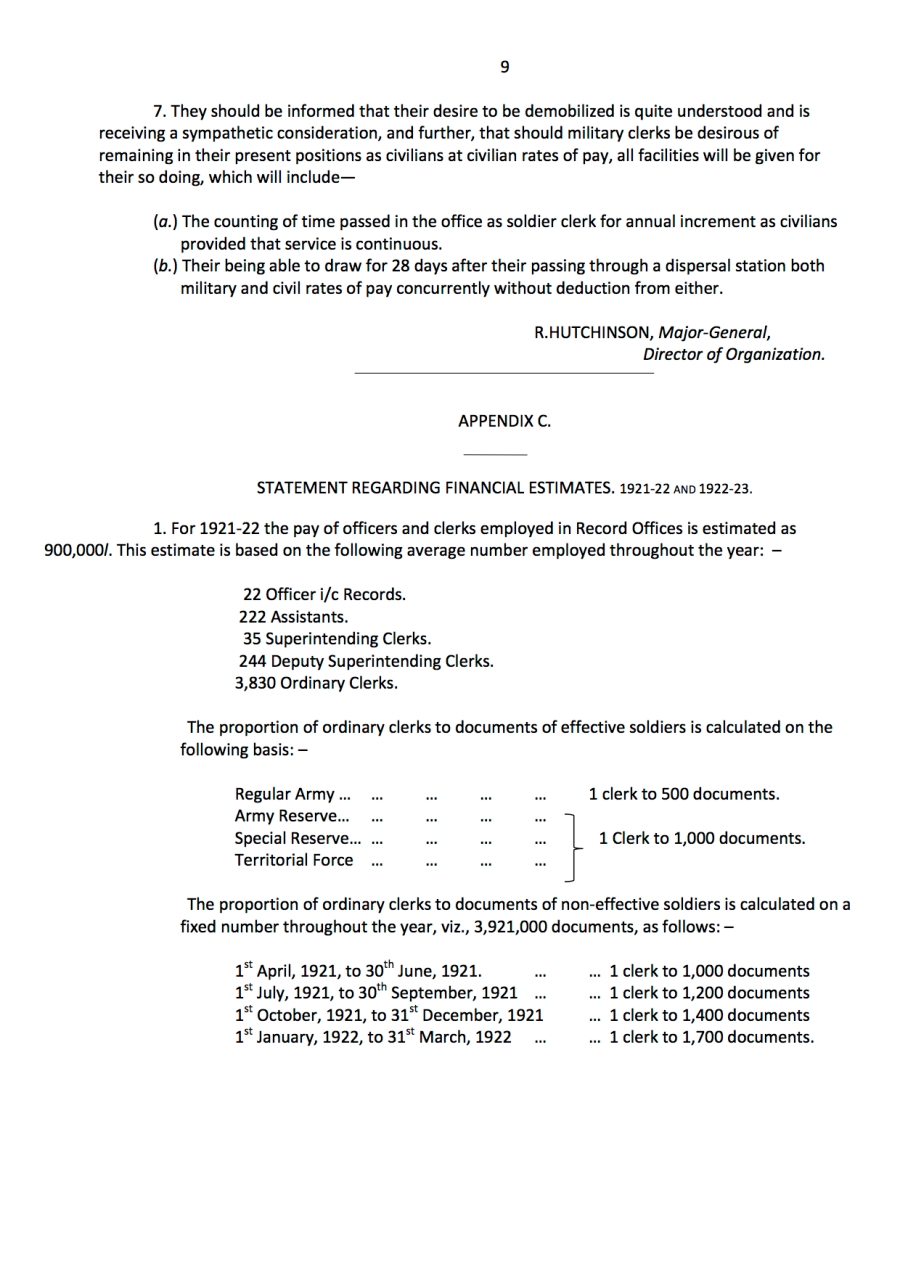